Hello everyone of the AntsCanada forums!

I am a new member here experiencing and learning day by day with my two new colonies. Now, I am sure that you all like photos so without too much text I give you my Camponotus noveboracensis queen and her two nanitics. 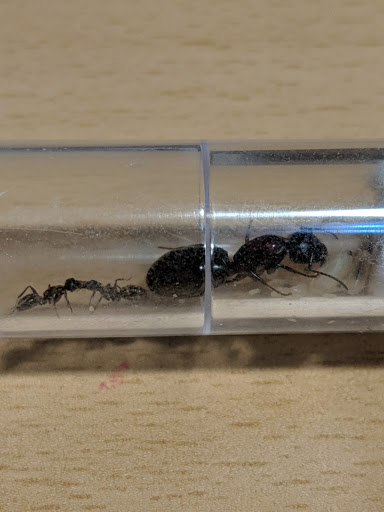 That photo doesn't show off her striking thoracic markings, but I didn't want to blast her with my camera flash.

Here is their whole setup, AntsCanada's own test tubes and test tube portal.

The foil shielding provides a dark space over the water tube but the queen was insistent for quite some time on staying in the sugar water tube. She seemed relatively apathetic to the ambient light so I later added some red film (from the AntsCanada ant tower) too give some additional comfort.

This is my second C. noveboracensis queen this season, my first had less brood but 6 workers. Sadly, the queen and workers died off slowly - the culprit is thought to have been pesticides in the honey I fed them. It's been a few weeks since the first queen passed, but some of the workers continued living healthy lives. Now I have only one remaining from that colony that has been diligently caring for a remaining larva. She is a young worker and still is hesitant to go out for food or water, but she has survived thus far and I intend on caring for her until she too passes.

On the plus side, I have been far more cautious in controlling variables now that I have seen first-hand how fragile a young colony is. I am happy to report that the new queen and her two nanitic are thriving. Today they finally decided to move into the shaded and slightly warmer water tube - and during the move I was able to count over 20 eggs! In fact, the queen laid an egg in front of me almost immediately after I received her. Good work queen! Me and my brother named this colony The Carpenters.

As luck would have it, while I was decorating the ant tower (which currently is only home to the orphaned worker from the first Camponotus queen) a Tetramorium queen landed on top of the ant tower right in front of me. This queen near literally fell into my lap, I quickly gave her a test tube setup of her own.

Without missing a beat - knowing that a nuptial flight was taking place and somewhere close - I found another Tetramorium queen in my driveway. This one was wingless and searching the sandy cracks for an unclaimed spot to call home. I gave this queen a cozy test tube setup as well. To my surprise, after checking in 2 days later, she had laid over 10 eggs. Way to go, new queen!

They are being kept in the packaging for an old camera of mine, it is conveniently perfectly shaped to cradle up to three of my test tubes and has foam insulating the test tubes from sound and vibration as well as an easy to open without causing much disturbance flip open top. It is pictured below, and low and behold I saw the wingless clean laying yet another egg when I tried to take the picture. 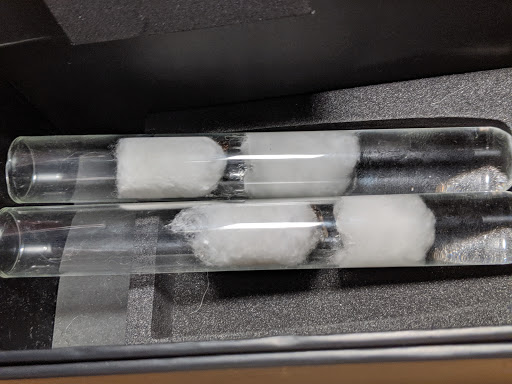 I can get closer and better pictures, but since these queens were captured only 3 days ago I am giving them as much peace and quiet as I can. The winged queen has not removed her wings nor has she laid eggs, but I have read queens can take up to 2 weeks to settle in after capture. There is obviously the chance that she hasn't yet mated, but is it too early to tell?

Anyways, the Tetramorium queen who has been aggressively laying eggs was named by me and my brother as well. The name comes from his hard rock band, she and her young will be known as Manwolf's Marauders.

Maybe my fellow forum members here can weigh in on whether or not I should wait patiently for the winged queen to settle in or if I should release her in case she has not yet mated. I look forward to reading what you all might suggest.

Thank you for reading through this long post that should bring you up to date on The Carpenters and Manwolf's Marauders. I will post updates, and that camera I mentioned might be in the progress of taking a week long time lapse video of The Carpenters in their new home! Stay tuned for what excitement may ensue.

Check out my colonies! https://www.youtube.com/channel/UCDze5idJomnpRCpvd3QoAFA
Or, if you would rather read about them check here - https://forum.AntsCanada.com/viewtopic.php?p=60680#p60680
Top 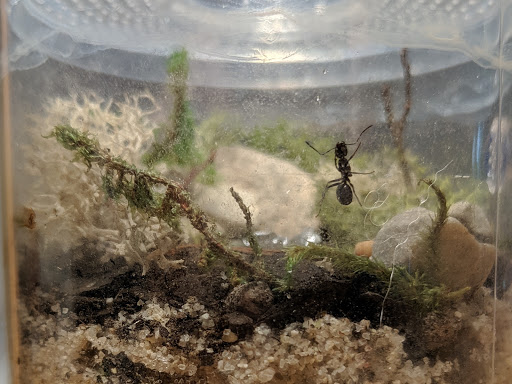 The aforementioned last-of-her-colony, she is still taking care of her little larva which is hidden away but I occasionally see her carrying it and tending to it. Apparently she is reaching her 'exploratory/foraging' age, as of this afternoon she finally is gathering more food (some sucrose syrup and super worm bits) and enjoying the mosses and rocks.

It's sad that her queen and sisters passed, but I am still amazed at how dedicated she is to caring for her last young sister - regardless of her inevitable plight.
Check out my colonies! https://www.youtube.com/channel/UCDze5idJomnpRCpvd3QoAFA
Or, if you would rather read about them check here - https://forum.AntsCanada.com/viewtopic.php?p=60680#p60680
Top

Very cool. I wish you the best of luck!
Top

Here is a video teaser for future time-lapse projects showing The Carpenters and their move into the AntsCanada test tube portal. I really like the portal because of how easy it will be to keep things sterile and small for the young slow growing Camponotus ants!

https://youtu.be/34ExdqnlaMc You can watch the video of the colony here!
Check out my colonies! https://www.youtube.com/channel/UCDze5idJomnpRCpvd3QoAFA
Or, if you would rather read about them check here - https://forum.AntsCanada.com/viewtopic.php?p=60680#p60680
Top

sartwell90 wrote: ↑
Tue Jul 09, 2019 8:27 pm
Here is a video teaser for future time-lapse projects showing The Carpenters and their move into the AntsCanada test tube portal. I really like the portal because of how easy it will be to keep things sterile and small for the young slow growing Camponotus ants!

https://youtu.be/34ExdqnlaMc You can watch the video of the colony here!

Here's a few pictures for all those out there who love photo updates! I hope you all enjoy.

Starting with The Carpenters' queen and nanitics... 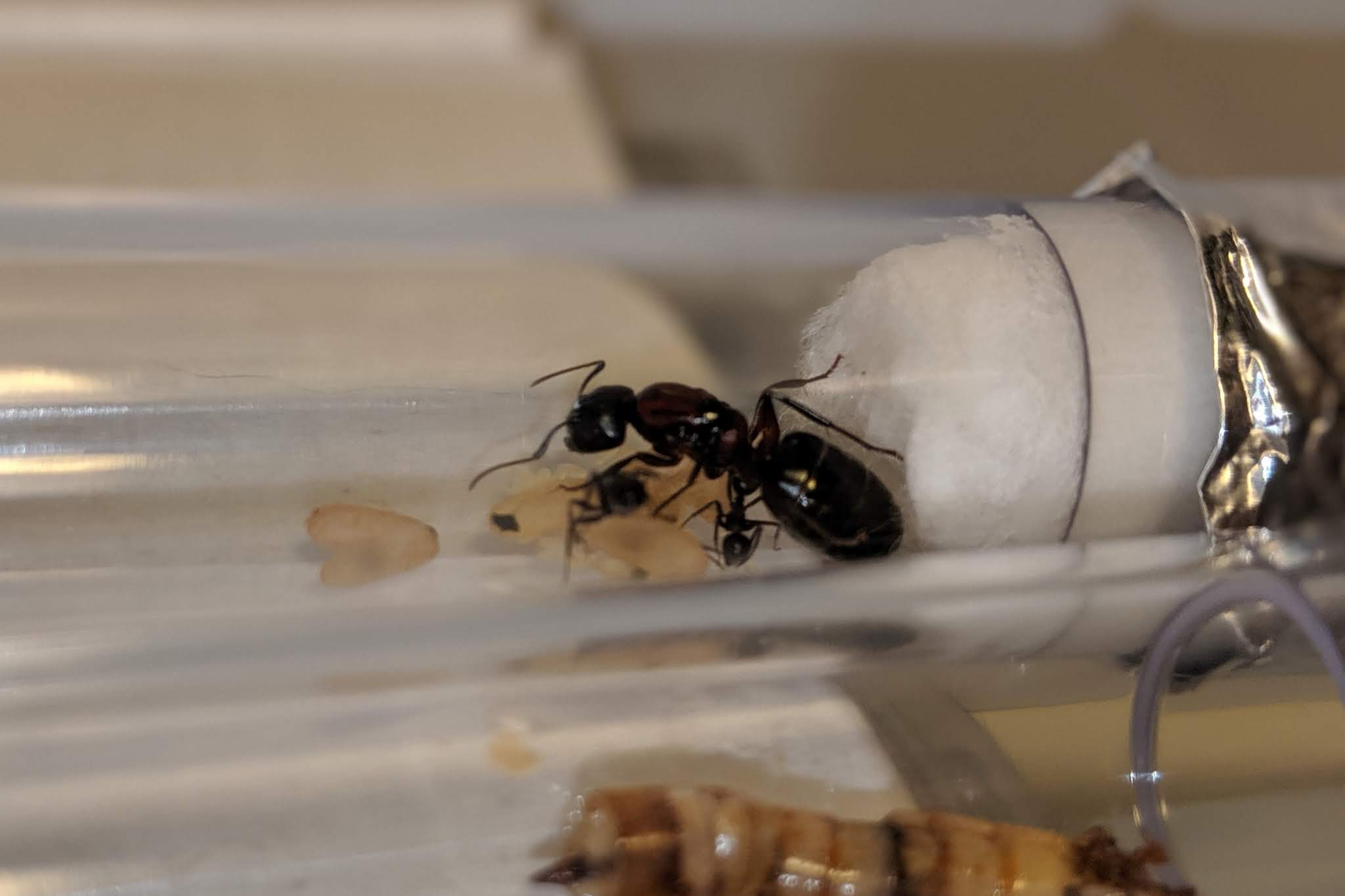 The photo turned out a bit blurry, I am working on getting high quality photos but the focus can be tricky inside those tubes.
But here is a treat! The Tetramorium queen with all her eggs and even - if you looks closely - you can see some have hatched! 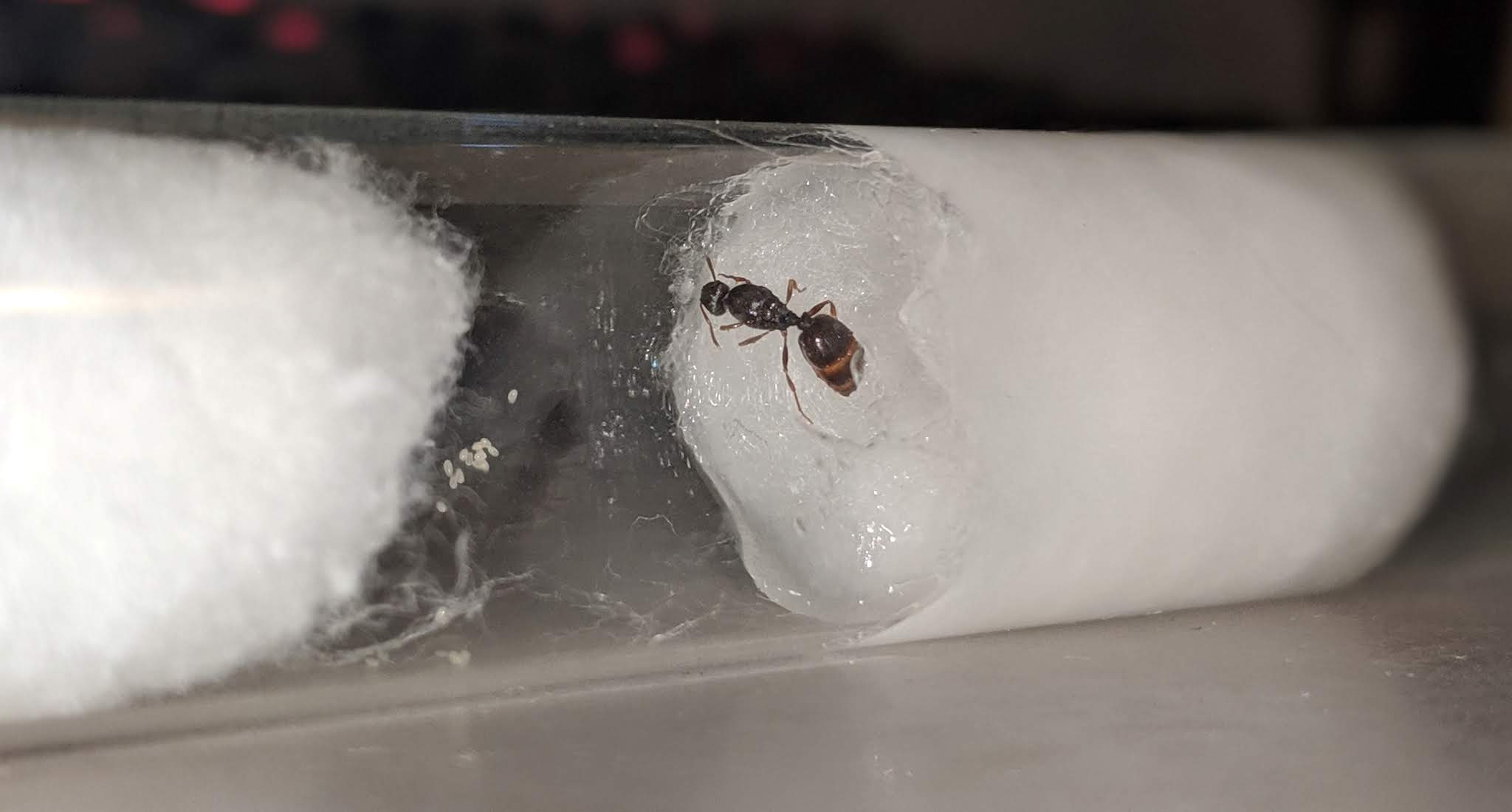 Less than a week since she was wild caught. Maybe some others have housed Tetramorium queens before and are used to their rapid egglaying - but it seems to be almost all she does! Even when she was out in the light for a few seconds to get the photo, she went about laying more eggs (I even checked real close and you could see the yellow-white egg popping out). I also lucked out on the photo for this super tiny queen, the focus turned out great! You can see the rough patterns on her head and the small spiny parts of her thorax and abdomen.

My research suggested this was a dry-loving species, and the tube is usually on a small incline which keeps one part quite dry. That being said she seems to always lay eggs on the water cotton and then after laying a few she moves them to different areas. She also seems to keep the larva and eggs about to hatch away from the recently laid eggs. So interesting!

I assume she knows whats best for her and her brood.
Check out my colonies! https://www.youtube.com/channel/UCDze5idJomnpRCpvd3QoAFA
Or, if you would rather read about them check here - https://forum.AntsCanada.com/viewtopic.php?p=60680#p60680
Top

Quick check update. I have gotten word of someone who's yard is apparently home to many Crematogaster colonies which means there is a good chance I might be staking out their driveway sometime soon. To my understanding, Crematogaster cerasi - the most likely species to be present - is known to be polygynous. Maybe I might have a multi-queen colony to follow soon! Crazy, right?

The Tetramorium queen is now tending a host of 30+ eggs and larvae. She must REALLY like the test tube, I had given her slightly more space in the tube since apparently she intends to fill it and now indeed she is! I would really like to hear from someone with experience with Tetramorium because it seems to me like this colony might need lots of space... and sooner than I thought! I mean for a fully-claustral species she really is going to be tending a large group of ants out of the gate.

In addition, I spotted something I've seen once before - just before an eclosing happened - I've got my cameras ready and hopefully The Carpenters' third sister will be eclosed for us all to see! Don't worry about lights, either, I have designed a low-light/red-light recording setup to view the queen in space that is nice and comfortable for them. After all, their needs come before my curiosity.
Check out my colonies! https://www.youtube.com/channel/UCDze5idJomnpRCpvd3QoAFA
Or, if you would rather read about them check here - https://forum.AntsCanada.com/viewtopic.php?p=60680#p60680
Top

The eclosing is going to be happening soon, I saw one of the nanitics pull at the silk pupal casing and at her sisters tarsi - it seems they do this soon before the ant pops out.

In the mean time, I hope this new video will be sufficient for sating everyone's ant-keeping appetites.

Dining with The Carpenters - https://youtu.be/g91CfYek_cI
Check out my colonies! https://www.youtube.com/channel/UCDze5idJomnpRCpvd3QoAFA
Or, if you would rather read about them check here - https://forum.AntsCanada.com/viewtopic.php?p=60680#p60680
Top

Thanks Hawkeye! More to come for sure, my little red-light re-purposed box that my phone came in has provided some great filming and photo opportunities without having to affront or disturb the ants much. On the downside the low-light conditions lower the sharpness of the capture a bit, but we get to observe the ants acting more naturally (less stressed or defensive). I'm hoping to improve the quality of the content I provide here and on my channel steadily.

Also, I did manage to get some photos that show off this species' queen's beautiful markings as she was busy cleaning a pupa. 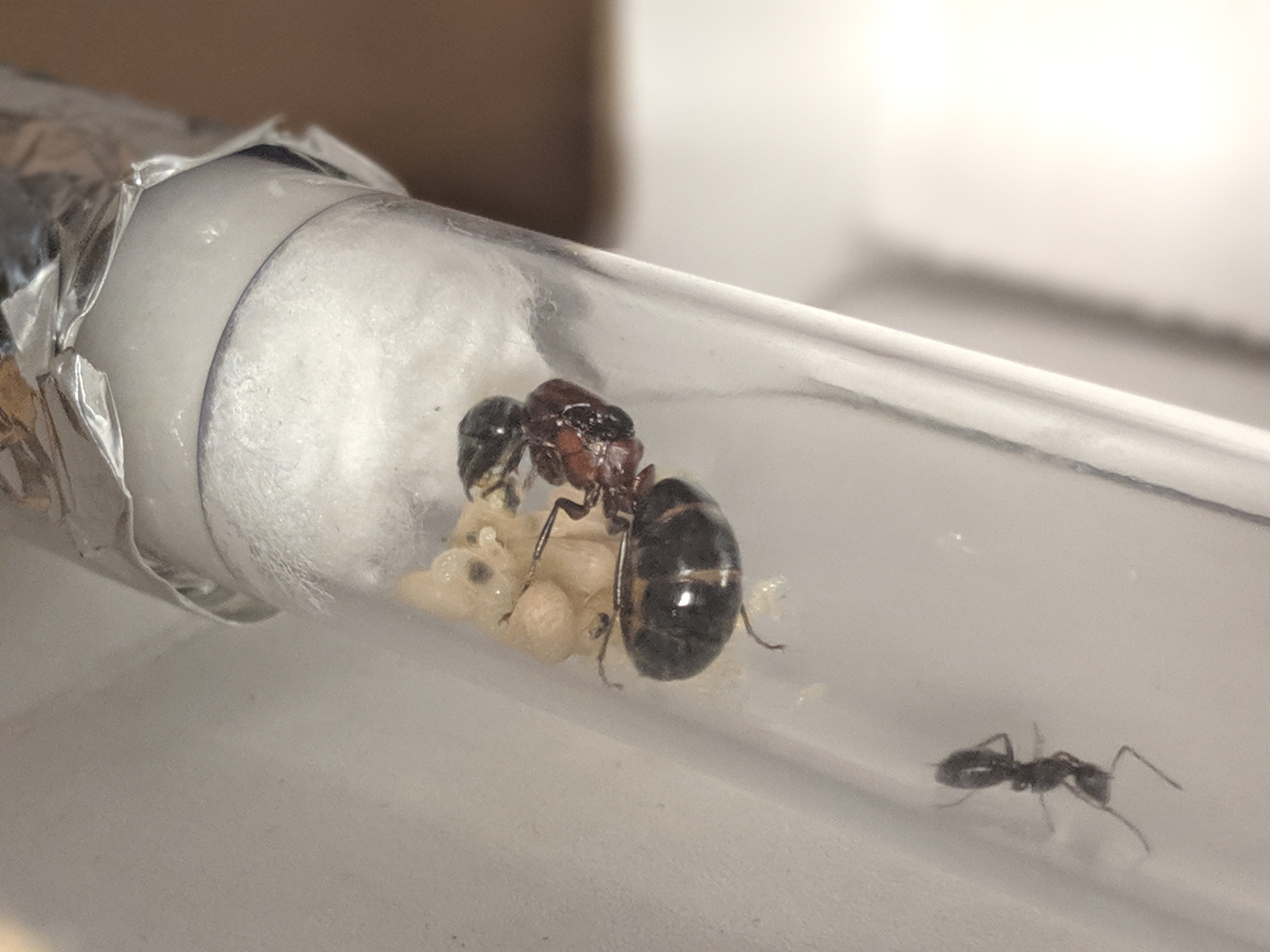 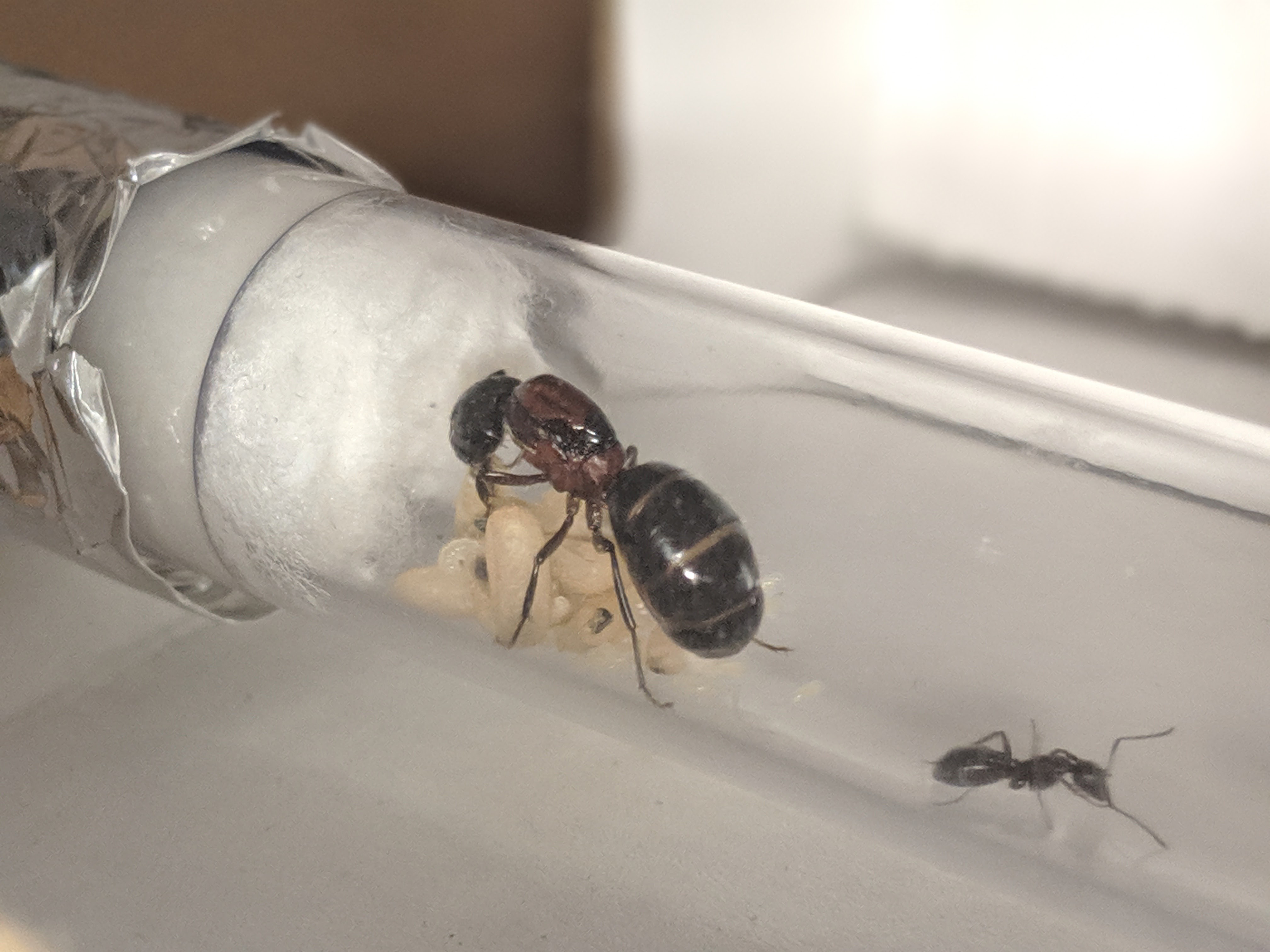 Check out my colonies! https://www.youtube.com/channel/UCDze5idJomnpRCpvd3QoAFA
Or, if you would rather read about them check here - https://forum.AntsCanada.com/viewtopic.php?p=60680#p60680
Top
Post Reply
46 posts