I captured some small black ants in mid April 2019 in central Texas. Currently, I think they are Monomorium minimum, but I'm not sure. Here is the identification thread: https://forum.AntsCanada.com/viewtopic.php?p=57930#p57930

I captured them while they were migrating nests. I got 4 queens and 20+ workers.

At first I kept them in a pickle jar: 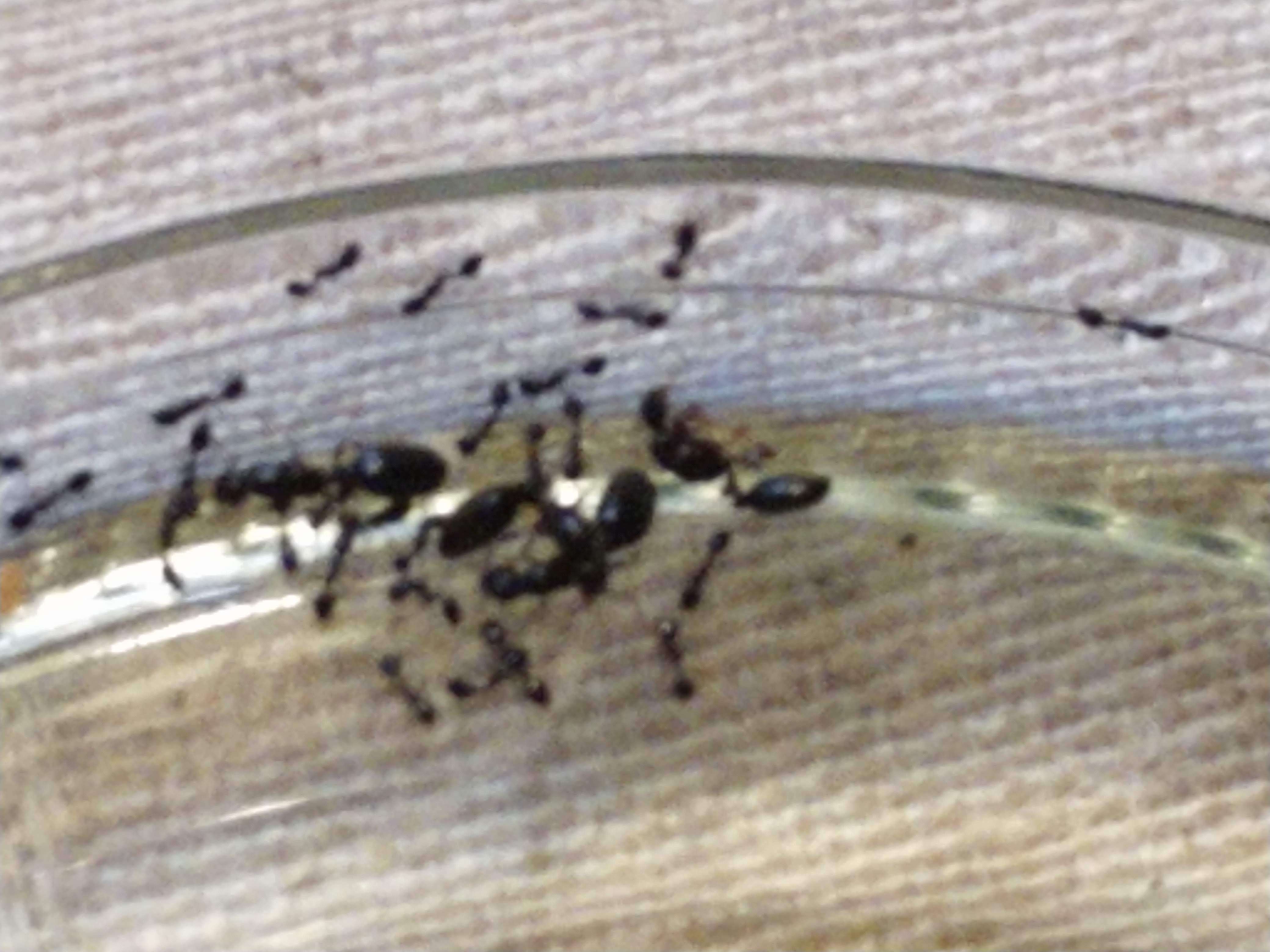 About a week later, I decided to try to move them to an outworld/hybrid nest combo: 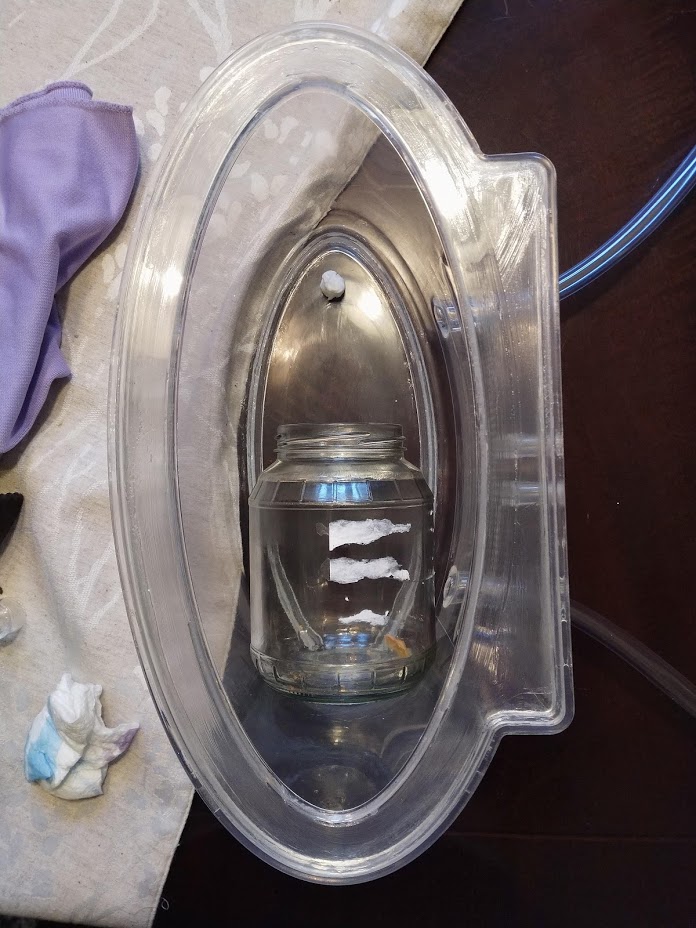 It looked like they had produced one pupae, which this worker is trying to move out of the jar and into the outworld! 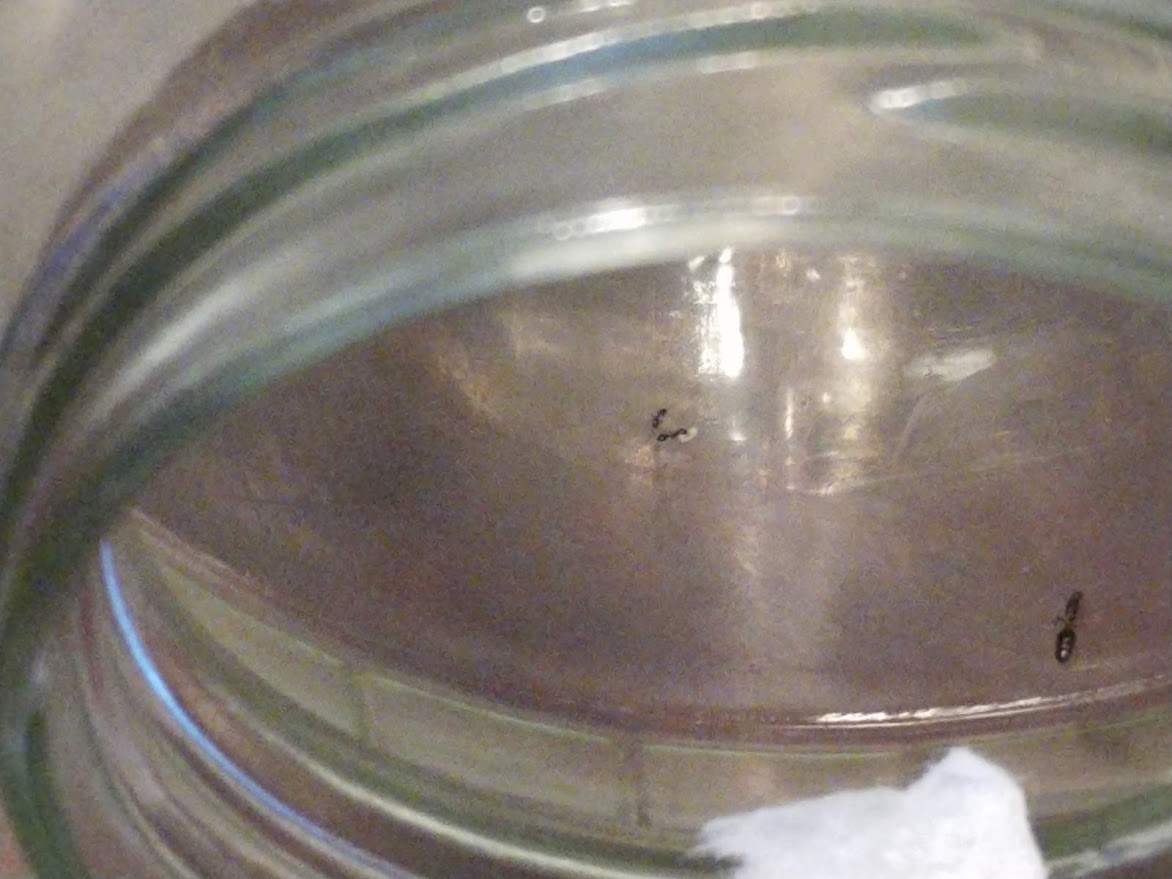 Unfortunately, one of the 4 queens died in the pickle jar, so I was down to 3 queens. I also lost some workers during the move.

I transferred them directly to the outworld, with tubes leading to the hybrid nest. I thought they would go straight for the dark, humid hybrid nest, but after several hours they had only explored the tubes and decided to stay in the outworld. I thought I would add a small piece of tree bark that I found to add some aesthetic. Naturally, they ALL moved into the tree bark! This was unexpected and a little frustrating. After about 1 week in this setup, the ants had still not moved to the hybrid nest. Also, I was losing workers in my Vaseline barrier. I decided they were not ready for such a large space. I moved them into a test tube setup. I put one of the queens by herself in a test tube and the other 2 along with the remaining workers in a test tube + test tube portal. This move was on 5/4/2019.

After another week went by, I saw that they had still not laid any eggs. I thought for sure with 3 queens, I would have a lot of eggs by now. After some research, I decided my office might be too cold. I bought a heating cable online. While I waited for the heating cable I didn't check on the ants for 2-3 days in a row. When I finally checked on them, I found they had laid a few eggs! Now I am thinking that I was just disturbing them too often and keeping them too stressed out to lay eggs. I have installed the heating cable anyway to try to speed up the colony growth.

Today, when I checked on these ants, I saw that their cotton in their test tube seemed to be growing some mold! 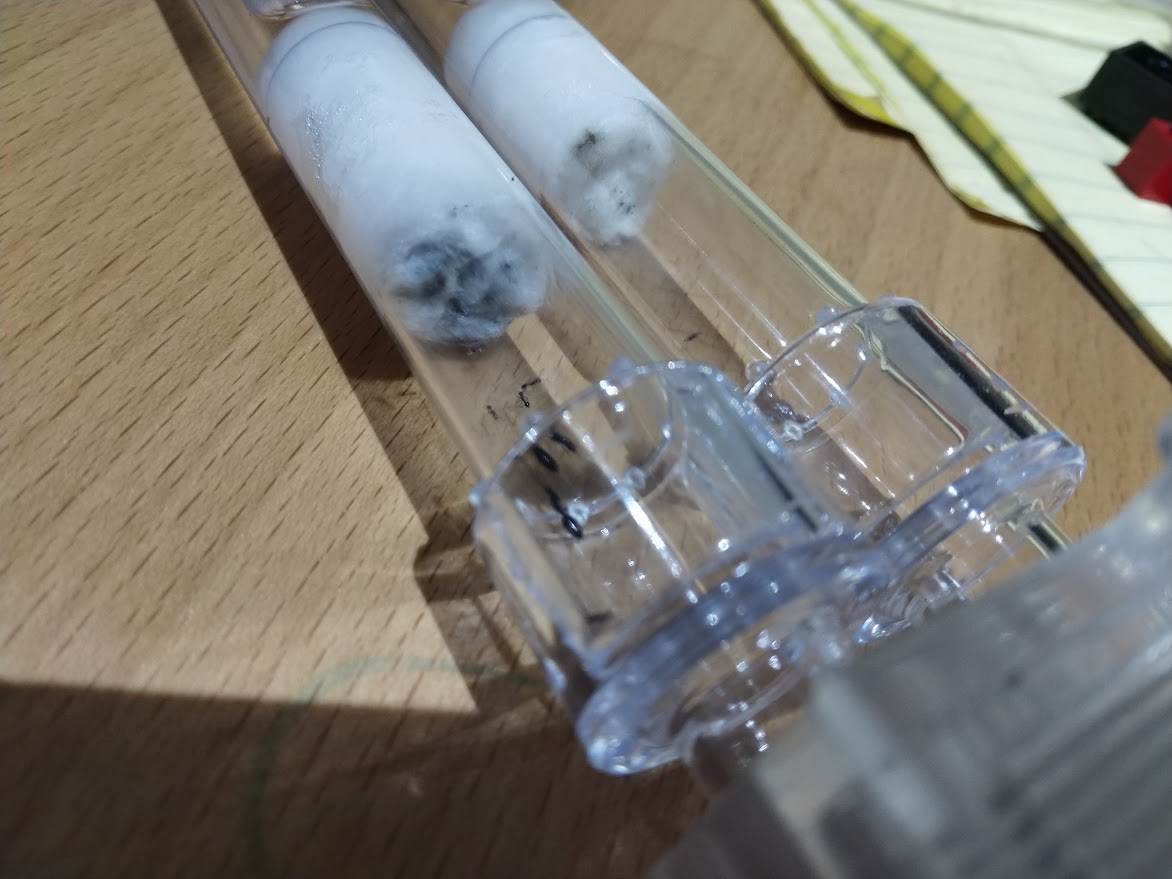 Does anyone know what might cause this? Is it dangerous? Is it common?

I am currently trying to get them to move to a clean test tube. 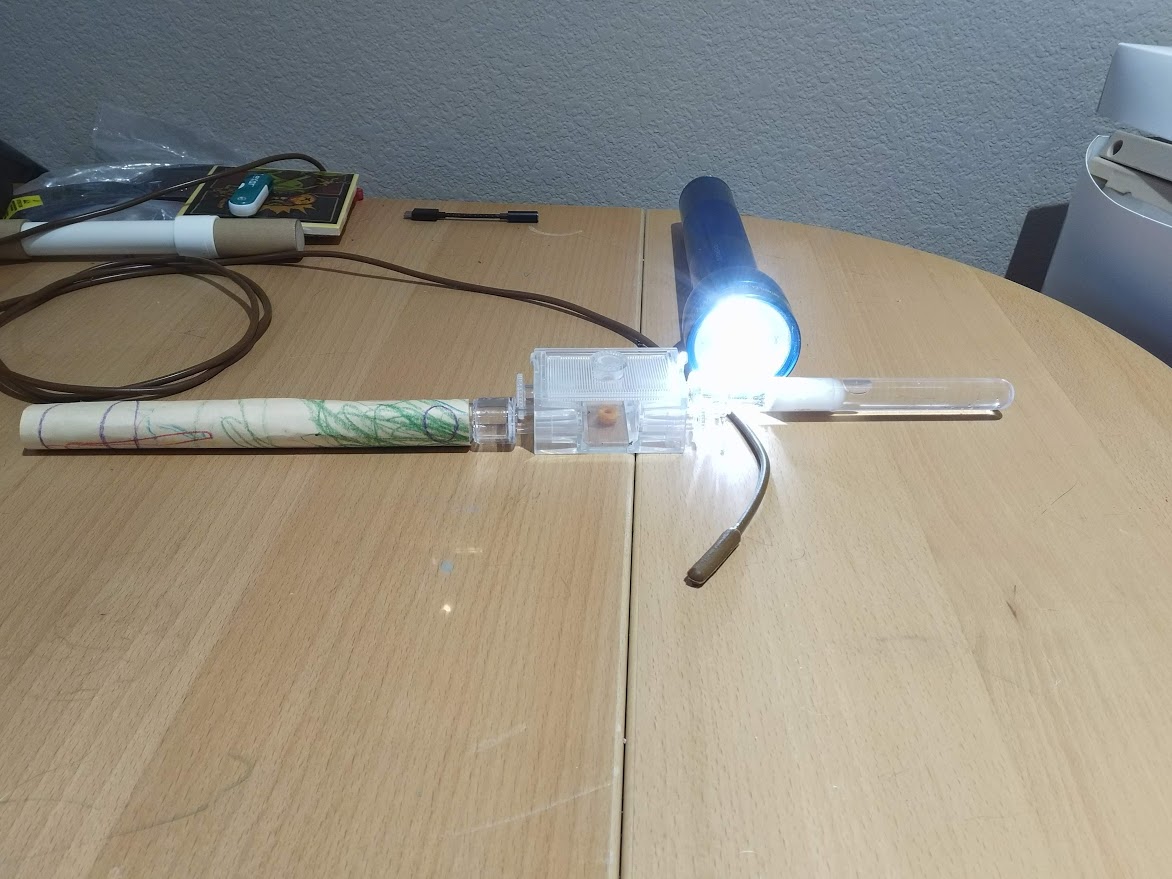 But they are taking their sweet time

Let me know what you think. What could I be doing better? I will update you all on the progress.
Top

All test tube set ups will mold eventually. A little bit is fine but a lot can kill the colony. Usually the mold doesn’t seem to cause any problems, but best to move them when it gets bad just in case.
Keeping:
Tetramorium immigrans * Lasius Neoniger * Lasius Claviger * Messor Aciculatus * Myrmica Rubra * Camponotus Novaeboracensis * Camponotus Turkastanus * Pheidole Pallidula

Thanks Joe! They're still not moving to the clean tube so I'm glad to know that a little mold is OK.
Top

Ok, so it has been a while, but here is what happened to this colony:

Soon after my last post, they started dwindling in numbers. They got down to 4 workers and 2 queens with a decent number of eggs. I started feeding them more sugar and gave them time to themselves. At this point, I basically expected to find them dead. HOWEVER, they managed to survive. I have had them 7 months now and they are back up to ~20 workers and still have 2 queens. I have not been able to get them to grow beyond about 20 workers. I wonder if anybody has any advice? I wanted to get them to around 100 workers before I moved them to a larger setup but I'm getting impatient. I try to feed them sugar and crushed bugs from around the house. the bugs are very sporadic. Do I need to feed them bugs more often to get the colony to grow? It is winter now, should I expect to have to wait until after winter is over for them to grow in numbers again? 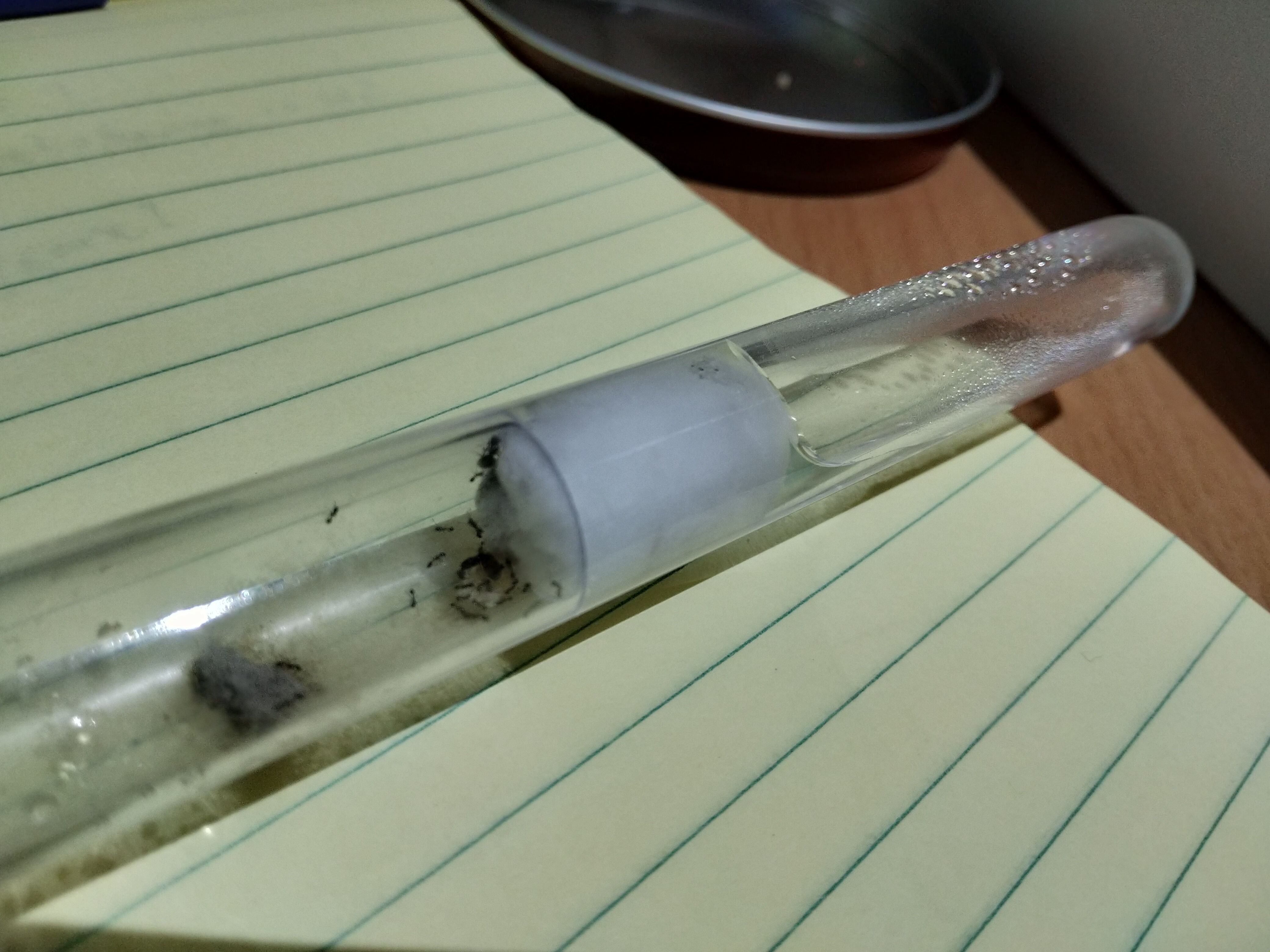 Ok, another update: a Christmas present for my ants

I originally bought the "All you need solenopsis hybrid" kit from AntsCanada. I have no regrets about this, I love AntsCanada and am happy to support them, but I realize now that it was a little overzealous for my tiny black ants. So the other day I saw these hand crafted ant homes online that are a little better sized for my tiny ants, so I went ahead and picked one up. I'm pretty happy with it, still trying to figure out how it all works. Here's the new setup, I connected the same test tube that the ants have been cozy in for the last few months directly to the new space. 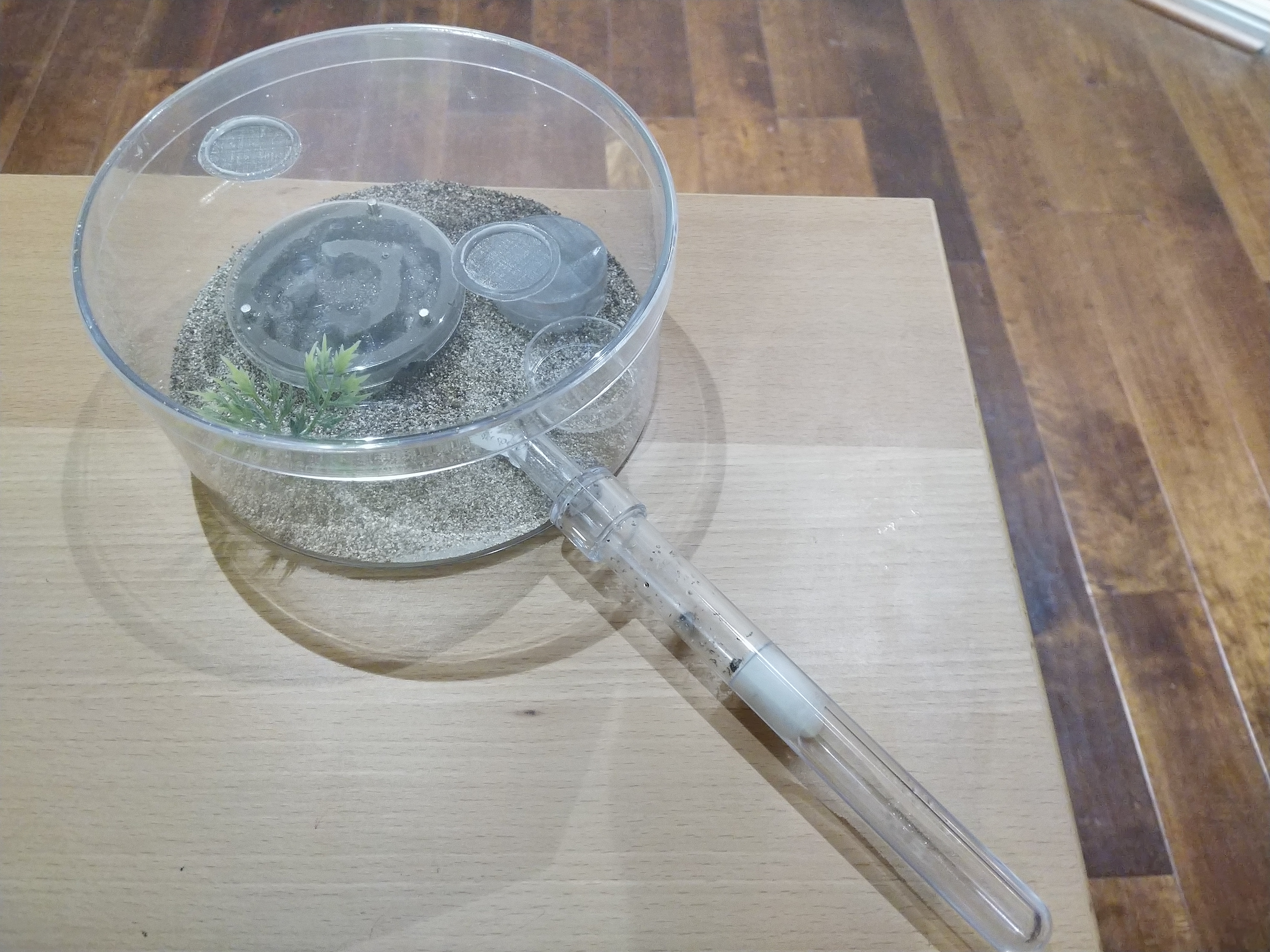 What do y'all think of the mold growing in the middle of the tube? Do you think they are cultivating it or something? They seem to like to lay on it and they've definitely piled some sand granules on top. I haven't provided any substrate for them at all, so maybe that's just the best they have?

Here's a close up of the ants tube again: 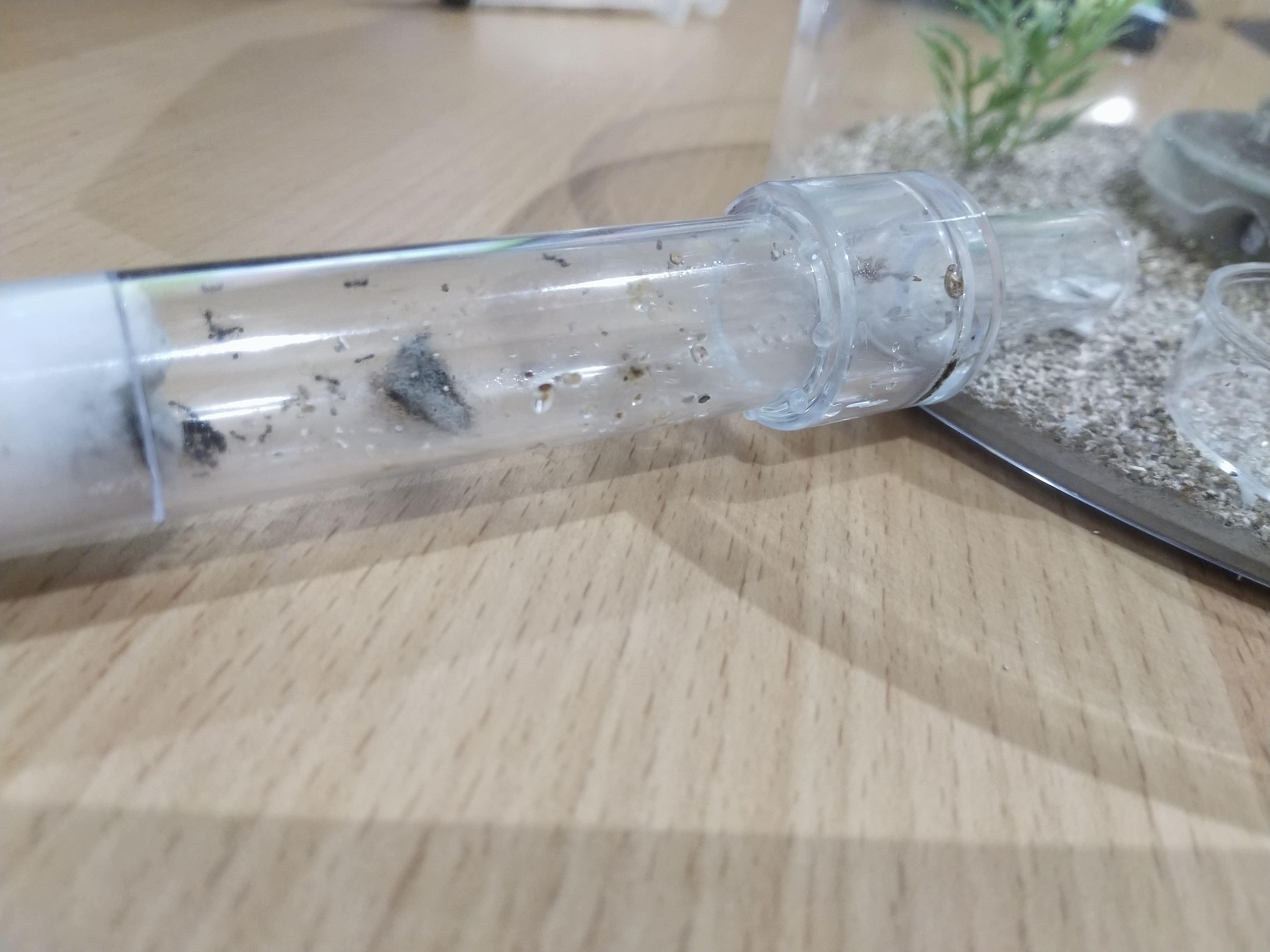 Here's a scout out on the paper ramp I made. Do I really need this ramp? I'm so paranoid that they won't be able to get back to the tube... 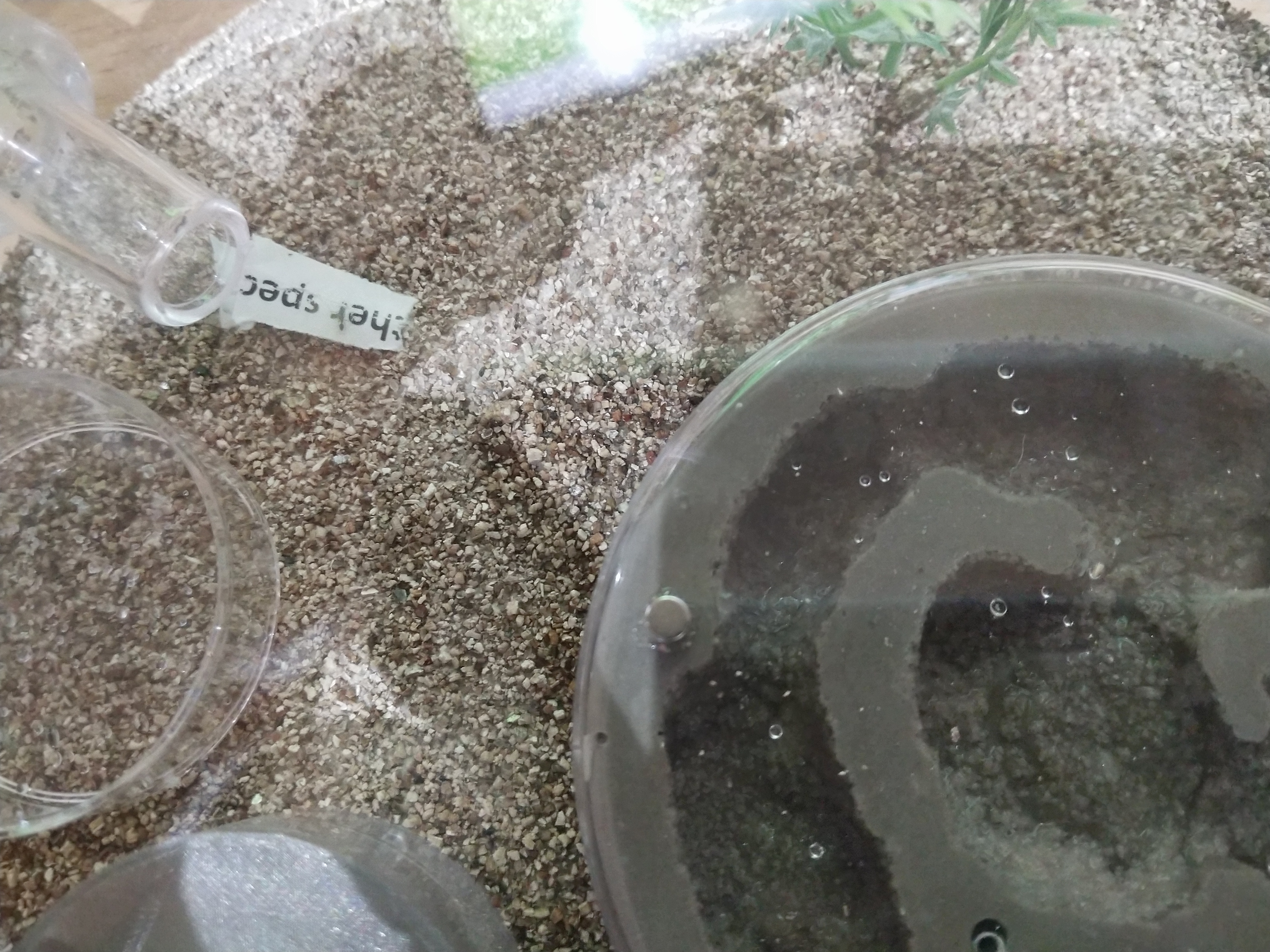 Here's a good shot of the new space: 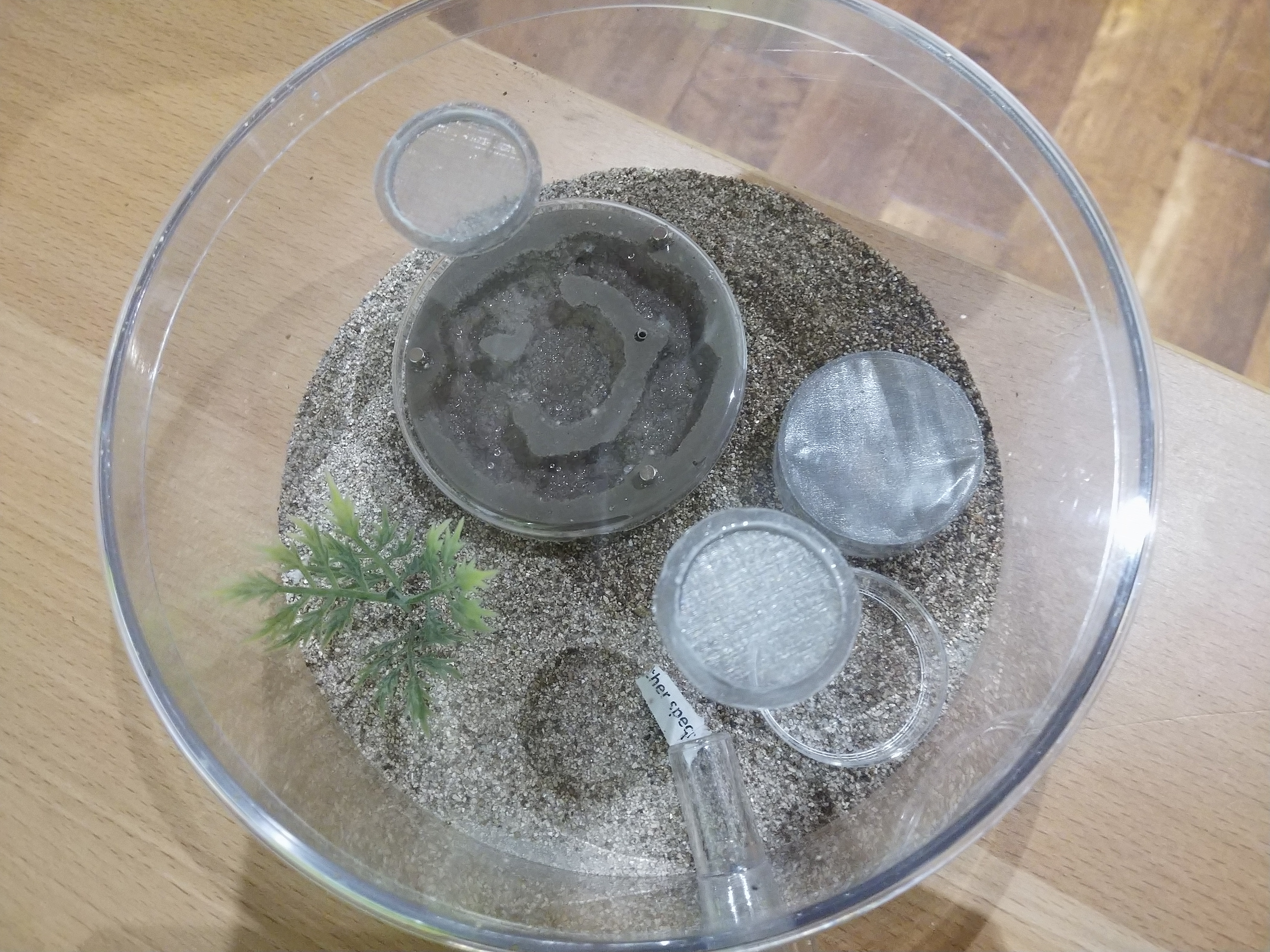 Okay, an update on the new habitat.

The ants did not take to it immediately like a kid to the tree on Christmas like I had hoped. That's not a big deal, but I wanted them to move out of that moldy test tube so I devised a plan: 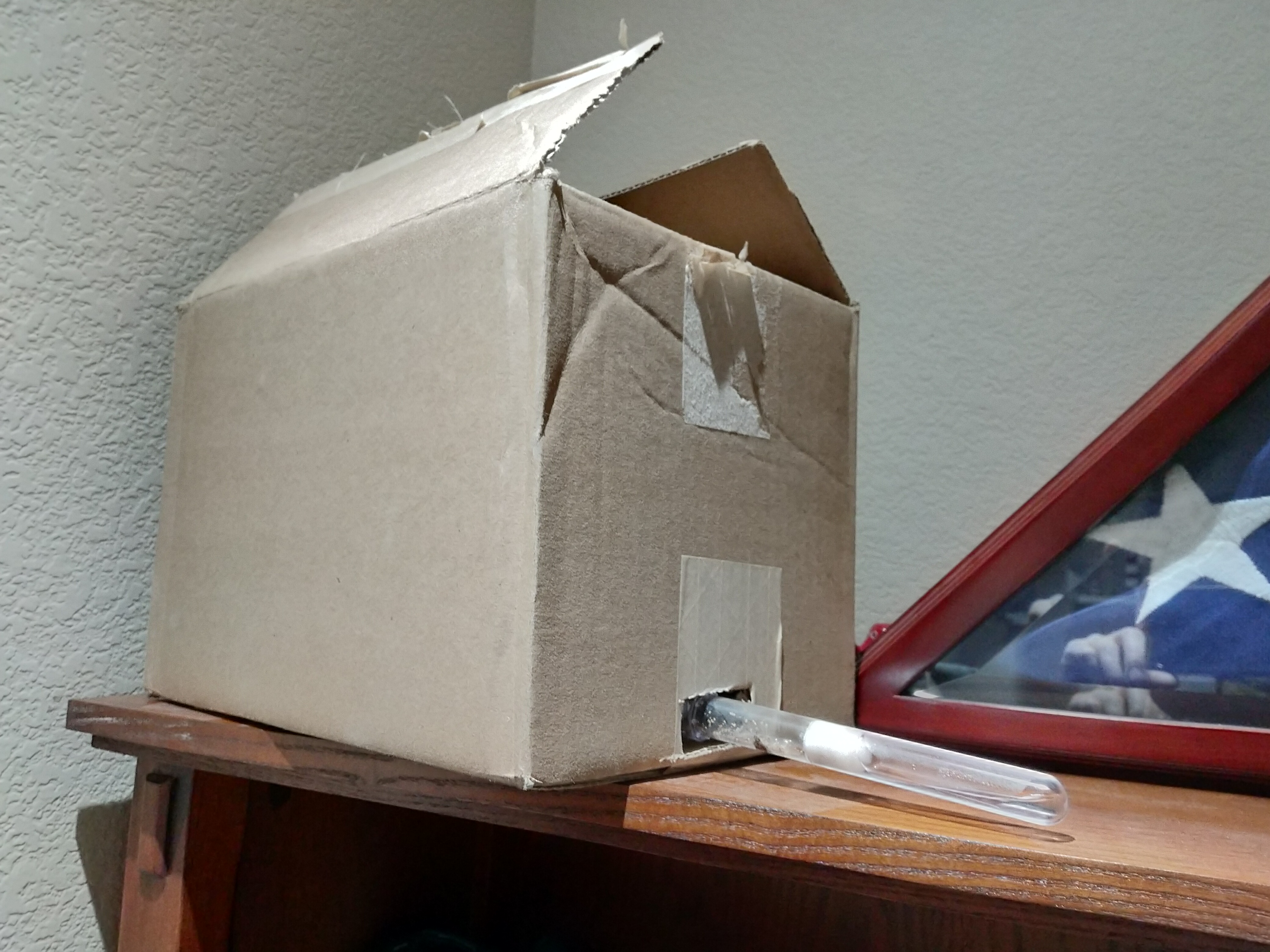 Previously I had tried to get them to move out of a moldy test tube by making the moldy tube bright. This time, I made the new space DARK. I left them like that for a few hours and when I came back, they were out of the tube! There were a couple of stragglers, so I left it like that for a day or so, then I checked in on my tiny tikes, expecting them to have moved into the awesome, cozy, and moist tunnels that were made just for them... 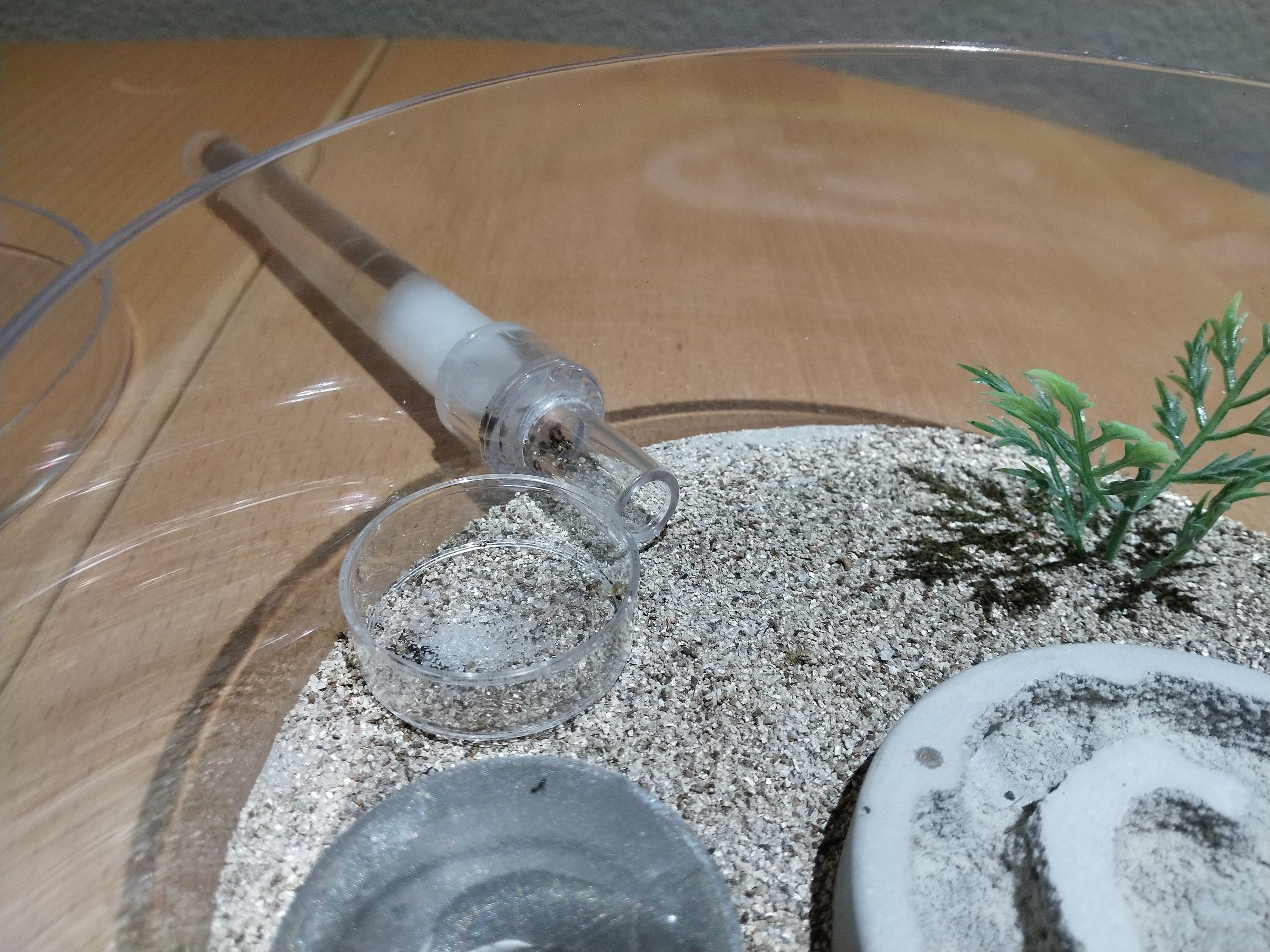 Of course, they made their own decisions about where they wanted to live. They moved UNDER the food dish. This makes sense, because Monomorium Minimum are notorious for living in the cracks of concrete and other tight places, but it is very frustrating

I didn't want to disturb them too much though, so I left them alone for a while. Bonus in the picture above: you can see an ant getting water from the water tower.

Part of me feels like I should have just let them live under the food bowl if they wanted to, but not only are they "supposed" to live in the nest area, but the food bowl could move accidentally, which could disturb them or even harm them. So, after about of week of letting them adjust to the new digs, I came up with another scheme to try to make the nest area more attractive. I knew from the previous trial that they did not like light. So I thought I would try the red film trick that I have seen other ant keepers use. I put red film on top of the nest area to make it dark, and waited: 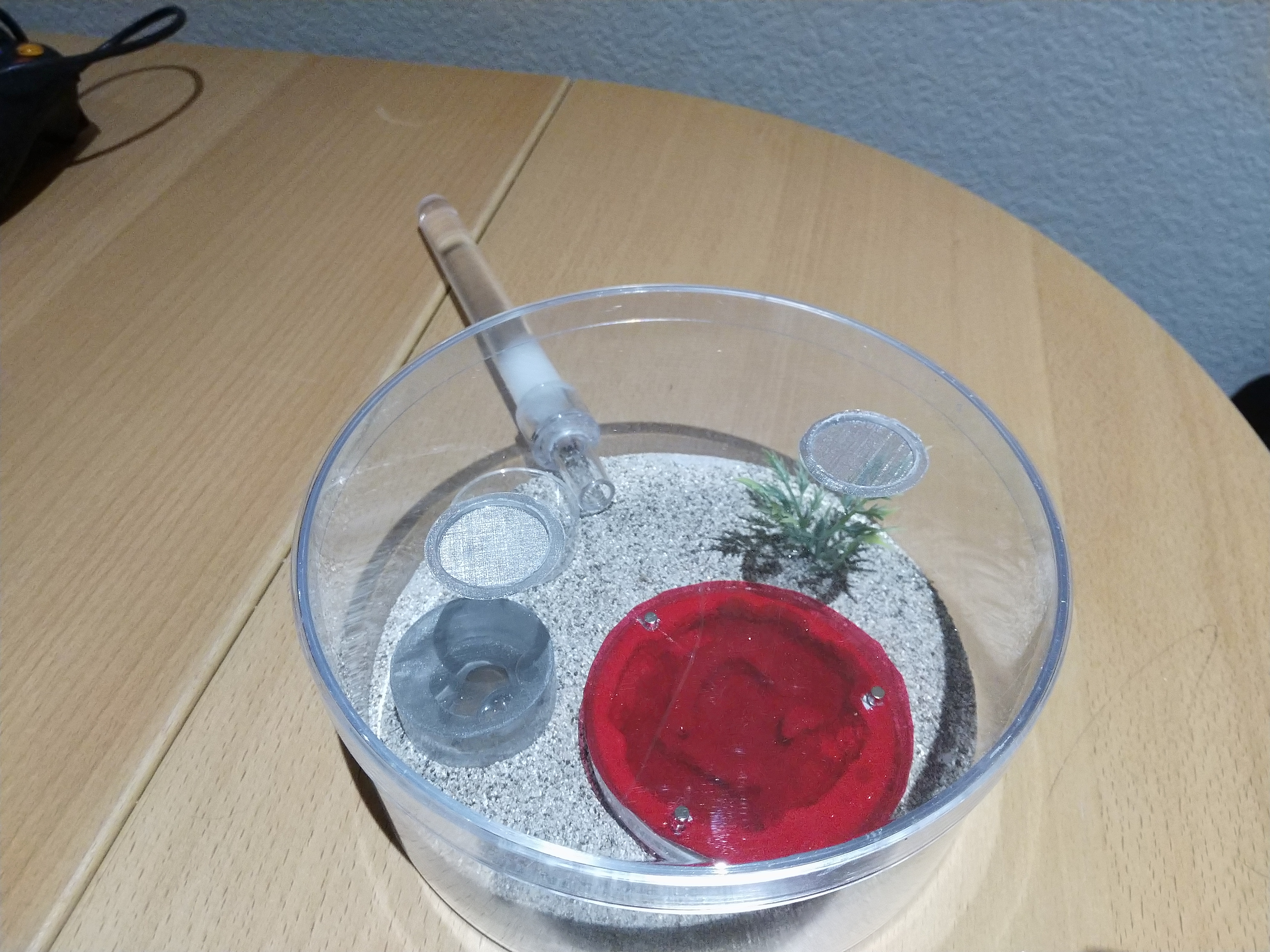 As you would suspect, my stubborn sugar suckers stuck to their original hideout. Tonight, I tried something a little drastic: I moved the food dish! Then, I left the habitat under the light again with the red film on the nest area and... 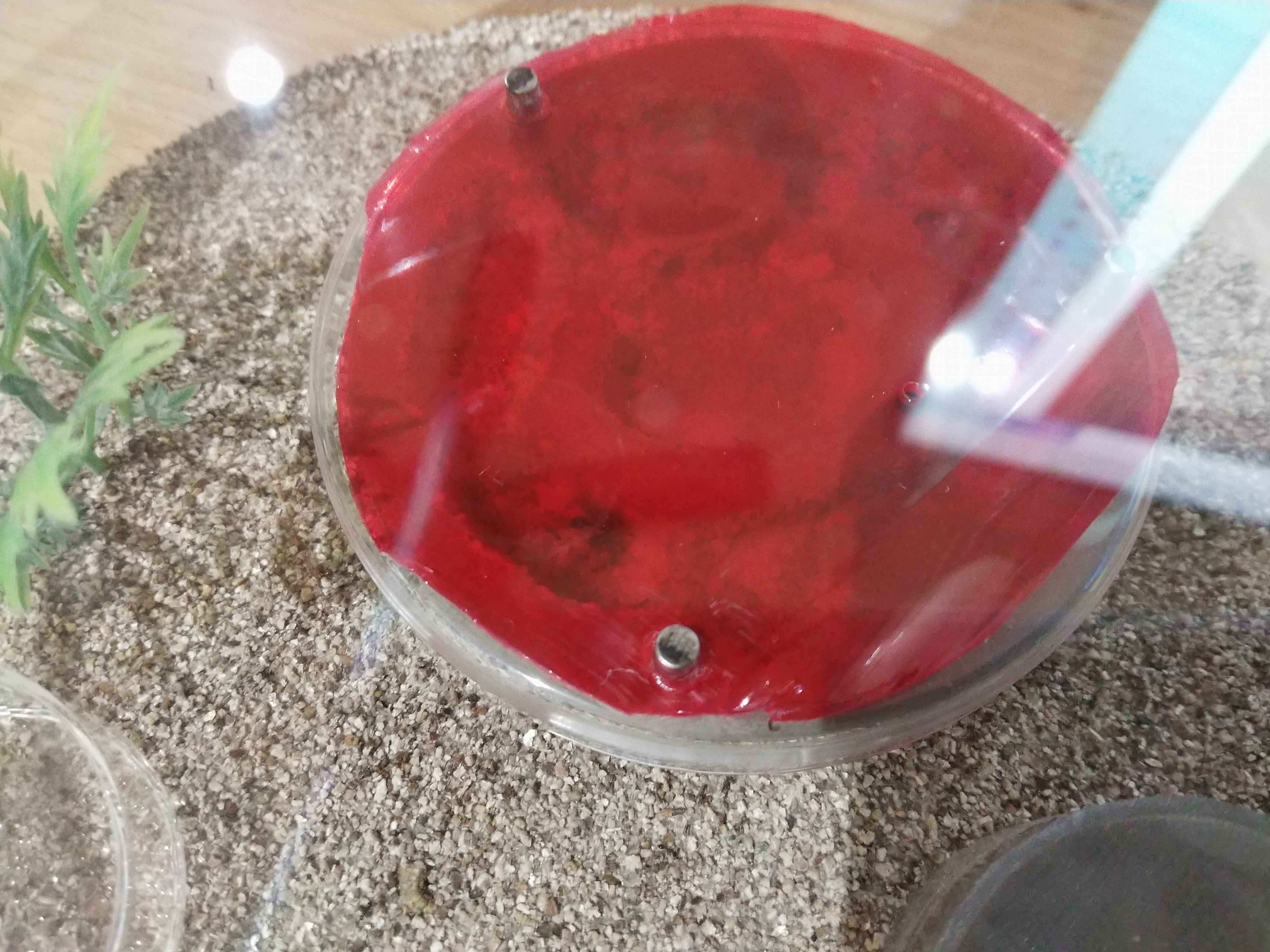 They finally moved in!! I hope they stick around. It's fun to watch them crawl in and out of the entrance. They're still a little upset right now, the scouts are crawling all over the place, more than ever before. Now that I have them living where I want, I plan to give them a good amount of sugar and I'm going to try crushed up cat food for protein, and then just leave them alone for a while to see if this new formicarium breathes new life into this stalled out colony.
Top
Post Reply
7 posts • Page 1 of 1