Queen stole her tinfoil "feeding tray" and wont give it back!

Queen stole her tinfoil "feeding tray" and wont give it back!

Hi hope you all are well.

I recently aquired a Camponotus Herculeanus (Carpenter) queen and decided to feed her some "Sunburst ant nector" on a peice of cotton, along with a bit of pork for protein, then placed them both onto a peice of tinfoil to try and avoid contaminating the test tube. She began eating straight away so I covered her back up in the dark and left her to it.

I've just checked on her and removed the pork but she has stolen the tinfoil and wont let me have it back!

She was picking it up and moving it from one side of the tube to the other, I paniced when she temporaraly lost her cluster of egss under it and was also worried as it is quite a small test tube she arrived in (100mm / 4") and she herself takes up half of the available living space, she messures about 18mm (3/4"). So with the above in mind I attached a small "founding" formicarium to her test tube to give her the option to move, she checked out the formicarium but then returned to her tube and began taunting me by waving the tinfoil at me again. I have no idea what she's done with the bit of cotton, but assume she's merged it into her drinking cotton in a further act of defiance against the man.

I know these ants are keen re-decorators but I cant shake the feeling the tinfoil is annoying her. But I might of been a bit rash in my panic and am looking for any advise on what to do now, my options seem to be:

Any advice would be appriciated! I've attached some photos which might help, sorry they are so dark (in perticular the second one) but it's night time and I didn't want to anger her further by flashing bright lights at her. 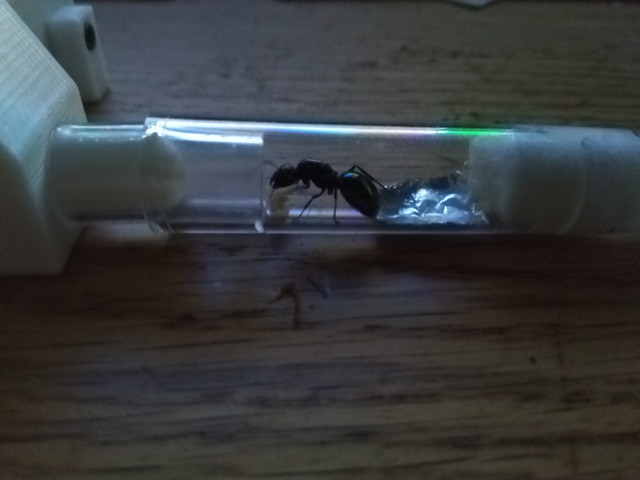 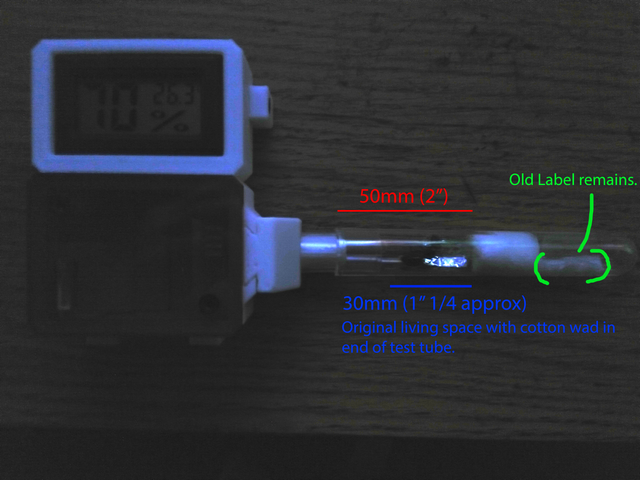 As noted on the photo the white stuff to the right of the cotton is actualy just a bit of old label on the outside of the tube, in case anyone was worried the drinking cotton was loose.
Top

Re: Queen stole her tinfoil "feeding tray" and wont give it back!

Leave everything the way it is. If it annoys her then she will try to move it herself.
-The Cool Camponotus Guy