I've recently become interested in ants by watching the AntsCanada YouTube videos, and I've just started keeping a new Lasius Niger colony. I ordered my queen off eBay, because I've missed nuptial flights and didn't want to wait until next year. The colony is up to about 20-25 workers now.

I have a few questions,

At the moment, I'm feeding my ants harvestment spiders and earwigs for protein. My wife won't let me keep insects in the freezer, so I'm making do with what's on the walls outside my house for now. I pre-kill them by dropping them in boiling water. I squash the earwigs with some tweezers too so that it's easier for the ants to get inside. The ants seem to be quite happy eating them, and there's a near infinite supply of them outside my house, so will this work as a long term diet? Also, how long is it recommended to leave uneaten food before replacing? At the moment I'm removing and replacing with fresh daily. I usually do one of each.

The tube my queen came in is also now out of water, although the cotton is still wet. I've added a fresh tube, but I'm not currently actively encouraging the ants to move in. It's just arranged opposite their old one. The new tube is from some kid's bubbles rather than being a normal test tube, and is slightly smaller. Will it be big enough? Also, should I try to encourage the ants to move, or just leave them to their own devices?

I also have a question about my barrier. At the moment, I'm using plain baby powder with no alcohol. It's worked so far. I've just bought some 99.9% isopropyl alcohol, should I start using an alcohol/isopropyl mix instead? If so, is it safe to apply without removing the ants, or are the fumes bad for them?

I'll post a picture of my current setup, if anyone wants to critique it that would be helpful. 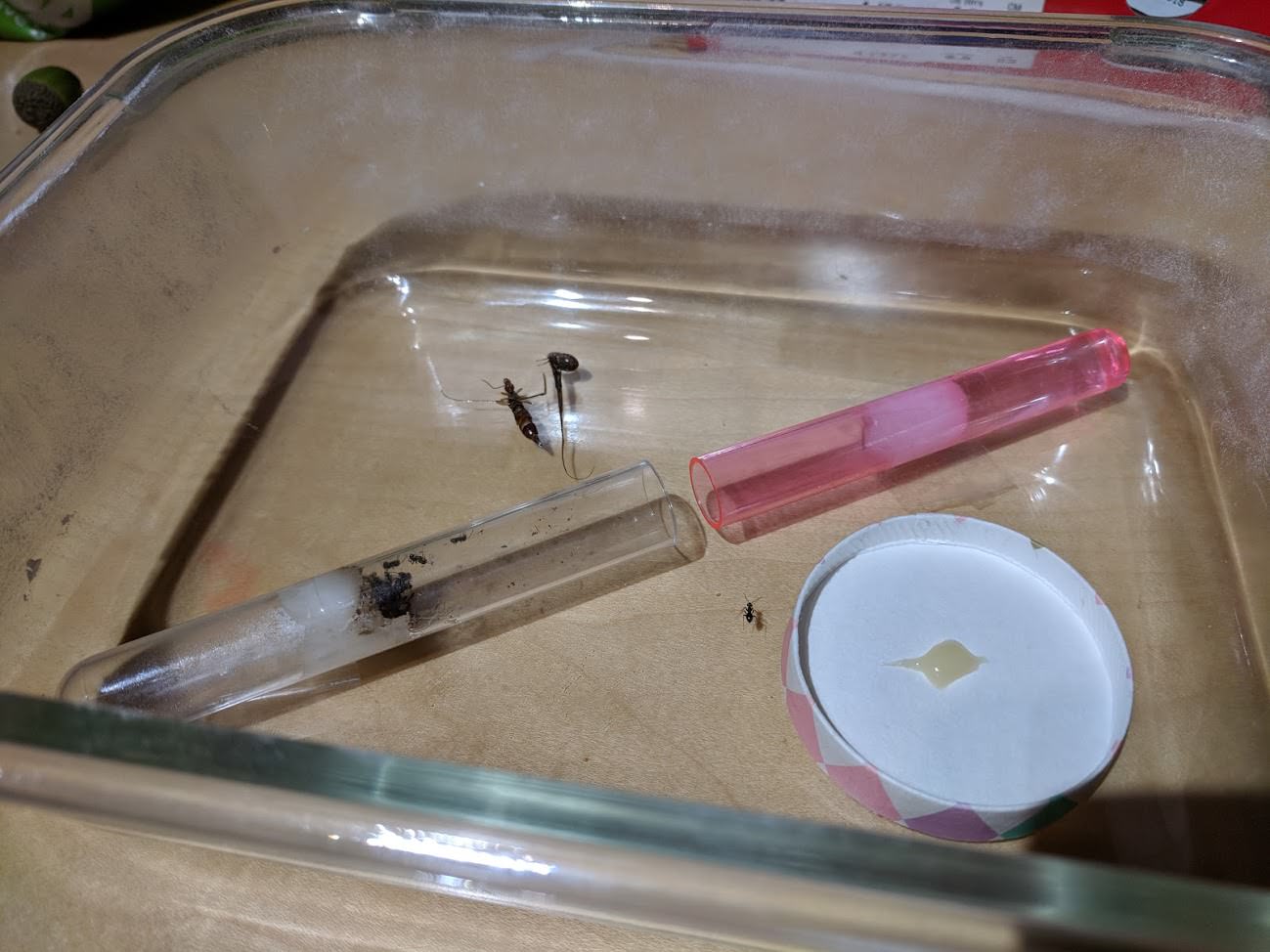 Re: My new Lasius Niger colony

Looking good. The testtube should be fine and they might even prefer the smaller testtube. About the food, perhaps just keep doing it with a daily change so the area stays clean. You could also feed the ants some honey so they get something else for a change. A small drop will do.

I'm keeping Lasius Niger myself and caught 10 Queens so far. There also might still be a chance for a last nuptial flight.

I hope your ants came in ok cause you ordered them from ebay. You could also have arranged with a local GAN Farmer to buy a Lasius Niger colony.

I hope you keep those little fellows in the darkness for most of the time so they can chill.

I cannot give you much advise on the barrier but you can try that. I had bought me a teflon mix to apply but I'm not sure on how long it lasts. I will have to try and figure that out. :/

If you have any more questions just go ahead and let us know.

Btw I just rechecked your picture and I think they don't need this much honey. Perhaps add less honey . Like about 1/10 of what you give them now.

I will try to show my colony of lasius niger this afternoon if my PC can manage the workload of the stream and sims 3 at the same time.
Doing some proper research is the best way to start an antcolony. After the research you can still go and fetsh a colony from one of your local GAN-Farmers.

Re: My new Lasius Niger colony

Thanks for the feedback.

I've noticed I'm giving them far too much honey, I've just been taking it away and replacing with fresh while I work out how much they eat. I'll give them less.

I was a bit concerned that the journey would be hard on the ants ordering them from eBay, but they seem to have managed. I had a search for a GAN farmer, but there didn't look like there was anything in my area.
Top
Post Reply
3 posts • Page 1 of 1